We awoke to a beautiful, dewey morning. After coffee I set to the task of giving the boat a good dowsing and subsequent drying. With the boat shiny and clean again, we made the decision to not stay another day in Kilcoursie Bay.

Reviewing our maps earlier in the morning, my dad had suggested that we head for Frying Pan Island and to a popular restaurant, Henry’s. The only caveat to this plan, to my utter dismay, was that we needed to again take a small craft route to get there. Reminding my dad that I refused to pilot the boat through such waters, he persisted that the course would be wide and deep enough to progress without difficulties. I remained hesitant.

The path to the small craft route was another relatively long one. Maybe 2 miles. In that time, my dad took the opportunity to explore our route via our chart plotter on the boat as I motored us out of the anchorage. Thankfully, what he observed (in the lack of detail and soundings) on our chart plotter, made him alter his decision to head for Henry’s. Unfortunately, at the start of this trip, the digital charts that we purchased for our chart plotter did not include charts for Canada. We thought that they did, but they did not. So, we have been navigating on old data ever since entering Canada. We are picking up our new digital charts in a few days in Midland, though.

With our deviation determined, we altered course slightly and made our way back to open water. Being cautious, as I sometimes can be, I wasn’t going fast enough through the channel for my dad. So, I relinquished the wheel to him and he kicked up the speed. I didn’t see what the rush was, but whatever!

My dad navigated through the channel without incident, and we were again in the glorious arms of open water (have I mentioned how much I love open water?). Unfortunately, the wind was not in our favor again today; both directionally and strength wise. So, onward we motored towards our new destination of Big Sandy Bay located on Christian Island.

As we drew closer to Christian Island, we began to investigate our anchorage on the chart plotter with a more discerning eye. Taking into account the forecast for tonight and the direction of the prevailing winds, we decided that a more protected anchorage would be desirable. Lucky for us, just a little further South and East was Thunder Bay. We caught the needed change early enough so that we didn’t need to jog around islands and only a few degree swing to port was necessary.

Upon entering the bay, we noticed that this was a pretty special place to be. It was wonderfully protected and there were numerous beautiful homes right along the waters edge. One in particular stuck out from the rest. We originally thought that this place was a kind of yacht club, because according to our charts, there was a public marina very close by. However, we just happened to meet the owner of the home as he pulled up on his brand new, all wood, custom built, Clarion cruiser with four of his buddies (one of which was a Priest). We didn’t believe him at first that it was him home, but all confirmed and by judging the way he spoke and pointed a few homes down to his “boat house” from which he pulled his new cruiser out of, we were inclined to believe him.

Up until meeting this gentleman and his friends, we were struggling to scan the beach in search of a place to have a Friday fish fry. Nothing really jumped out at us and our hails on the VHF radio to incoming boats were unsuccessful. Nevertheless, the gentleman and his friends provided a short description on where to drag our dinghy ashore and how to get to the only restaurant in town. Thanking them for the information, they blasted off for the opposite side of the bay to another rather large and luxurious looking house set back from the beach.

Having determined where we were headed for dinner. I thought that since this looked to be a nice little place, I better clean up the best that I can. However, we were running low on water (down to one tank at 71%) and I didn’t want to waste it on a shower; for I was unsure of when we may be arriving in Midland to replenish our tanks. So, I stuck a toe into the lake water to test it out. The water was surprisingly warm. Not bathwater warm, but acceptable. I dawdled a bit before making the plunge, but ultimately I went in. It was invigorating to say the least!

Now somewhat presentable, we hopped aboard the dinghy and made the 1/4 mile row to shore. It was slow going; as we decided against putting on the outboard motor since we would be dragging it ashore and leaving it for an undetermined amount of time. All along the way the people on the beach were giving us the awkward eye for having rowed in at such a distance. 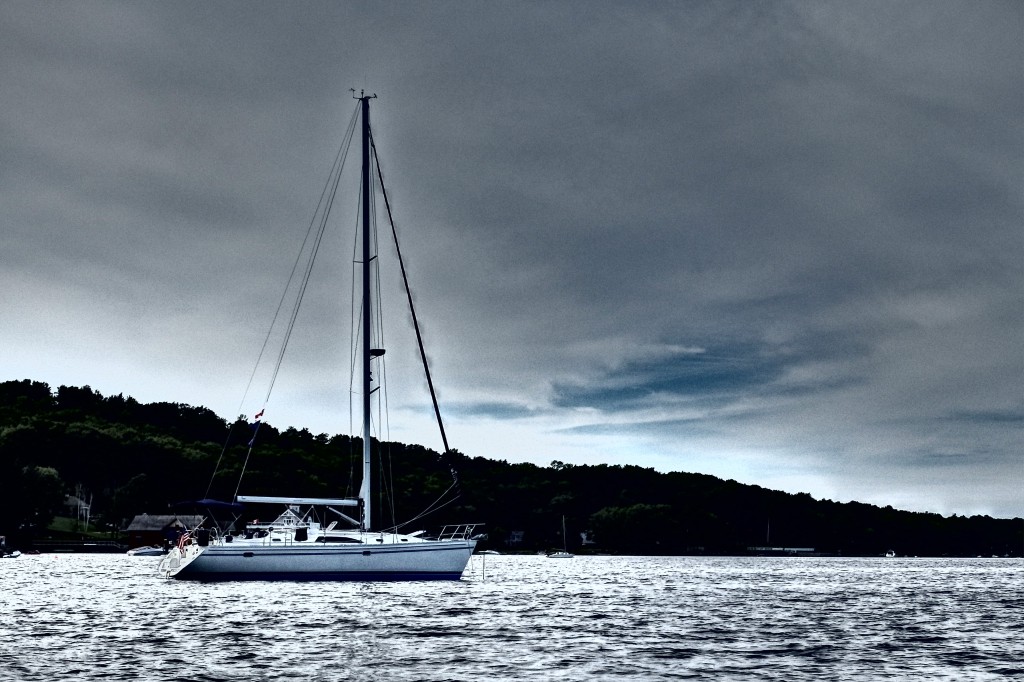 Once on the beach, we asked a gentleman doing some maintenance on his Hobie day sailor where the restaurant was from here. He pointed us a little bit further down the beach and we had a nice little stroll with our feet in the sand or in the luke-warm, shallow water just off the beach. We eventually found the restaurant, Thunder Bay Grill, and ordered up our dinner.

Now, this place was nothing fancy. On walking up to the establishment, there were two women sitting outside, smoking, eating, drinking, and chatting. We didn’t know it at first, but one was the owner. As we entered the front door, she paused her conversation with the other lady and out us know that she would be right with us.

The menu was relatively large and the owner was incredibly accommodating. We ordered our fare and my dad asked her if they served any beer. She said that she did not have a license, but that she had a personal stash of Busch that she was willing to share. So, out she came with two paper cups full of beer with the statement that we could not tell any one about this; for she could be fined heavily. We told her that she had nothing to worry about and we went on our merry way to find a table outside.

Once outside, we came to observe a peculiar little seagull (whose nature reminded me of my Dachshund, Finley) angling for scraps and the two women’s bag of potato chips. The bird was rather brazen, having no qualms with coming close to humans, climbing on chairs, or darting to table tops in his quest for food. He hung around the entire time we were there and later learned that he was a regular. The owner affectionately referred to him as “Pecker-head” and said that he ran the show around the place in terms of other birds. He would chase all the other avians away so that he had the best opportunity of securing any scraps left behind by patrons or the first shot at handouts.

After dinner we retired to the boat and watched another episode of Homeland. It was early yet, but we were both tired from another 7+ hour day of motoring. I’m not certain as to what tomorrow will hold. We may stay here another day or head towards Midland ahead of schedule.

Parry Sound, ON to Thunder Beach, ON