We left Shady Harbor pretty early in the morning. Our appointment down river in Catskill to re-step the mast was for 10:30am and we wanted to arrive relatively early so that we could get things setup on the boat.

The trip downriver on the Hudson was very pretty. It’s my first time seeing the Hudson, and it’s quite nice. It’s wide, deep, and well marked by our chart-plotter/channel markers. Such a dramatic contrast to what we experienced in the Trent-Severn. It was very relieving!

There wasn’t much excitement on the river. Boat traffic was light and the weather was pretty decent. One thing that did catch our eye was a big log floating just outside the channel. We’re definitely going to have to pay close attention to things such as this as we make our way to New York City. 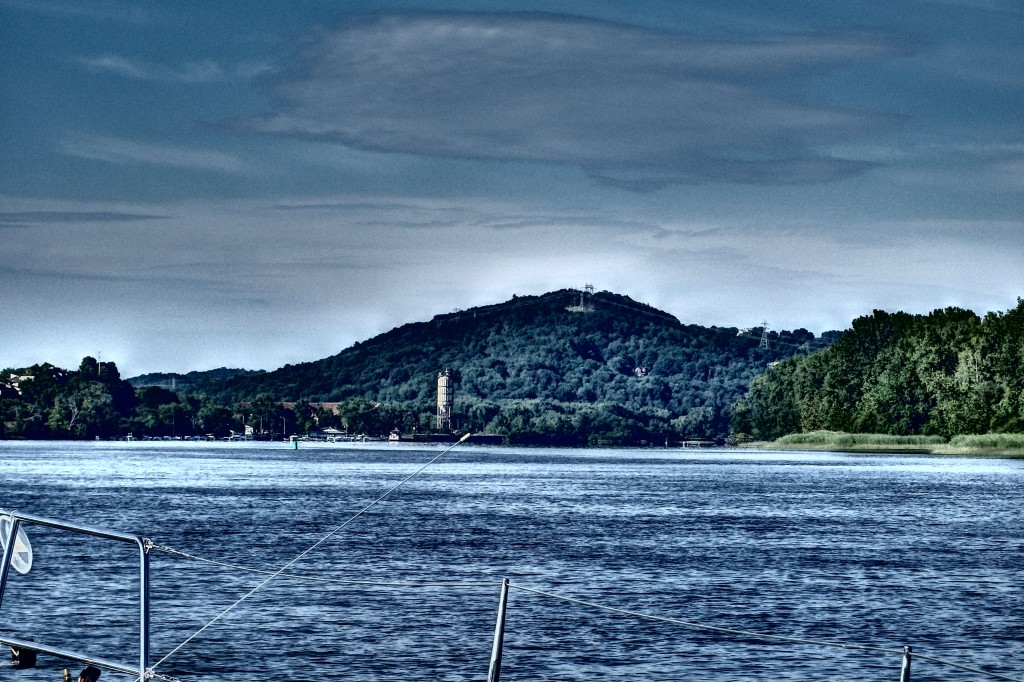 The entrance to Catskill was a little confusing, as it lacked a real channel marking system. There were a few green buoys in the middle, but it didn’t help us. We assumed red-right-returning applied. But, with all that we’ve been through, we didn’t trust anything. We tried hailing the marina that we were headed to a few times, waited a minute or two, and finally someone came over the radio. They had apparently spotted us and informed us to turn around immediately; as we were headed down the wrong side of the channel. Great…

We made it into the dock a little before 10am and were told that there was another boat ahead of us that was having their mast removed. We said no problem and that we also had stuff to do prior to putting ours back on anyways. The owner of the marina, Mike, came down shortly thereafter and made a comment/question about how we “had a lot of work to do.” We told him that we were almost done with getting the stuff out for he and his crew and he said, ‘No.” My dad and I looked at each other with surprise and asked him to clarify. Apparently, all that he and his team do is put the stick back on the boat with the crane and that we would be responsible for all the setup, reattaching the electrical components, re-attaching the spars/shrouds, and for ultimately tuning the rig.

My dad and I couldn’t believe our ears. We had never done something like this before. We are completely green in this arena. The owner could see that we were not happy with this turn of events and made a comment (that my dad still mimics today) that went like (in a thick New York City accent), “Well, you know, we’ll get’er done, you know. We’ll get’er done.” Easy for him to say! We were doing all the work!!

My dad and I spent the next few hours researching our options. We were not comfortable with the situation. However, after doing some research, I told my dad that I was feeling more and more comfortable with the whole setup process and that I was confident that we could do it. As a backup though, my dad located a guy at another marina in town that said that “he had experience tuning rigging.” We were not at all 100% confident in what we heard. But, figured that even if he’d done it once before, it was still one more mast than we had ever done.

The people on the boat that was before us were still tinkering and it was well past noon (almost two hours past our appointment time mind you). But that was fine. It gave my dad and I time to regroup and strategize about how we were going to tackle the project that was forced upon us. Shame on us though. We didn’t ask the right questions when we setup the stepping of our mast with this marina. This whole trip thus far has been a learning lesson.

Nevertheless, as soon as I had read enough to be dangerous, I set to the task. But first, we needed to go to Walmart (a 3 mile hike) to get adhesive remover because the “shrink wrap” that they used to protect the mast and boom left an awful residue over the aluminum. Along the way we spotted a hotdog place and decided that we should get something to eat. The dogs were great, but the guy preparing them was intense. There was a little confusion between my dad and the cashier with how many chili dogs we ordered and the guy was really gruff with the cashier. He must have also been OCD, because the method by which he folded the wrappers for our food was identical each time and done with the utmost care and concentration. As we left, he was still berating the cashier and I made the comment to my dad that he reminded me of the soup Nazi from the Seinfeld episode and we had a good laugh. So, we coined him the hotdog Nazi.

Over the next 6 hours, after returning from Wally-world, I was able to unwrap the mast, re-attach all the electronics (radar dome, VHF, HDTV antenna, anemometer), the windex, spars, and the upper shrouds. Lastly, with my dad’s help, rearrange the electrical wiring situation at the base of the mast that was a disaster.

After all the prep was done, I was exhausted. Both physically and mentally. And, hungry! We made reservations at the Italian restaurant in town that had good reviews. It was a pretty nice place. White table cloths, actual silverware, and really-really good food. Oh, and very generous with the wine. We ordered a half carafe and they brought us out a whole liter. Nice! When leaving the marina for dinner we noticed that there were a ton of cars parked on the street. But, we couldn’t find out where all the people were. It wasn’t until a waitress from another table mentioned something about a wedding to her guests that it clicked.

We called for a cab back to the marina (as we had walked the mile to dinner) but redirected him to drop us off where the wedding was happening. We figured we’d nose around a bit and then go back to the boat. So, in we went with the tried and true method of no eye contact and act like you belong that’s done us so well in the past. There were a lot of people there and they all seemed to be having a good time. We were incredibly underdressed for the affair, but we did our best to blend in.

We stood around and people watched for a while on the outskirts when we were approached by a very attractive young woman. Her name was Kris and she turned out to be the hairstylist and close friend of the bride. We let on to her that we just happened to be crashing the wedding, but she said neither the groom or bride would care in the least. And, if anyone asked, she said that we could say that we were guest of her. Perfect!

Armed with out new information, we sauntered over to the drink buffet and ordered ourselves a beverage. We felt better with drink in hand, like we belonged. Still underdressed though. We held strong in our position near the outskirts and as the night wore on, people began to get curious. By that time though, most people were a few drinks in and didn’t really care who we were. We chatted with a lot of people, including the father of the bride. Signed the guest book (I let onto our crashing and wrote down our website). We were even right there, not 5 feet away when the bride and groom cut the cake (which we also enjoyed). More people came to talk to us and we had a pretty good cover story going. We were cops from Milwaukee (dad was a detective and I was a beat cop) here on a boat and that we were friends with Kris. All this information satisfied most, except for two of the bridesmaids who approached us at the end of the night. They came up to us jokingly accusing us of being “wedding crashers.” It was late, so we were candid with them and they thought that it was hilarious. Both of them were incredibly nice.

The night was coming to an end and we caught up with Kris and her husband to thank them. We told them that if we were still in town the next day that both were invited to come out on a boat ride with us if they were interested. Just as the last song was playing, we made our exit. It wasn’t too terribly late (11:30pm), but we had been up since 6am. LONG DAY. But, very fun at the end 🙂 I can’t say that I’ve ever crashed a wedding before!

We both hit the pillows hard and needed to get as much sleep as possible. For tomorrow was going to be a day full of questions and anxious moments as we put the mast back in it’s place.